Cutting gaskets and it still will not start.

Yesterday I designed and cut new gaskets for the magneto using Make The Cut and the Cricut. 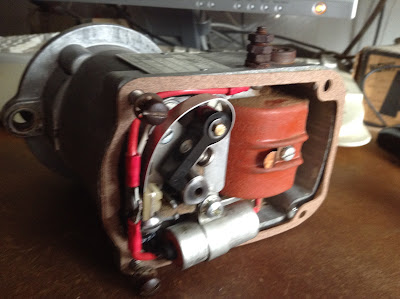 The cover gasket is two layers of a thin material stuck together with the elmer's spray adhesive used to hold the material to the cutting mat.   Cutting was optimal speed, 2 passes, medium pressure.  I have found that higher pressure tends to get the registration off.  Need to look into that. 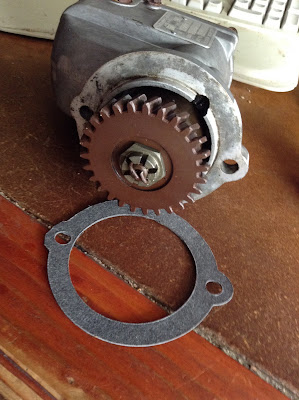 This is the gasket between the magneto and the engine.  It is cut from 0.033 gasket stock.  Cutting was one setting below optimal speed, 14 passes in 2 sessions, and medium pressure.


Next step is to take the bad one off and replace it with this.  Need to set the timing according to the AENL manual.

I painted the magneto tooth with the X white and used a flash light to see into the hole. The magnetos were exchanged but the engine only pop weakly once in a while even with starter fluid.  One possibility would be bad timing but I followed the directions.   I am wondering if there is a valve not closing as compression is iffy.

Did a wet compression test and reads 120 lbs not a bad number.  I am confused.  Need to recheck the spark.
Posted by Anonymous at 8:23 AM No comments:

I have been working on another project.   Of topic. maybe but it is my blog! 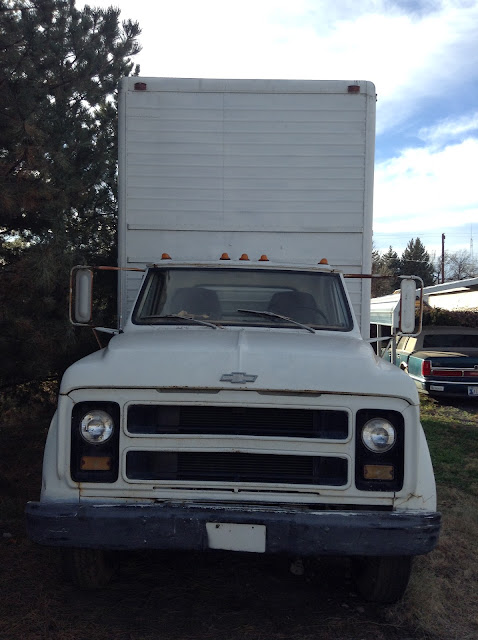 Getting my 1972 Chev C-50 truck running after 8 years of inactivity.  I replaced a few fuel lines and got the engine running.  Sounds good.  But there are no brakes.  I have a gallon of brake fluid, now all I need is ambition. 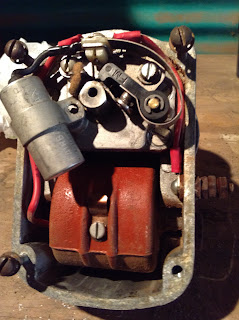 Now back to the roller.  The points from the spare AENLD were removed and clean in an ultra sonic cleaner.  The plan is to put them back in the magneto and see if we can get a spark from it on the bench.  If that works I will swap it with the magneto on the roller. 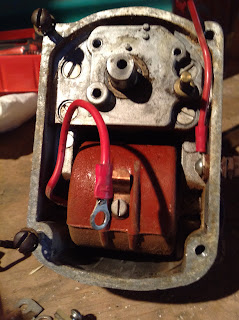 It was in the 20s (F) today so I brought the magneto into the house to work on it.  Assembled it and aligned the points under a magnifier.  Its alive!  Tosses a 1/2 inch spark and gave me a whooper of a jolt.   Next warm day is a ways off.

EDIT: "The breaker point gap of the Fairbanks-
Morse magneto and Wico magneto should have
an opening of .015 inch at full separation."

The roller is driven by a long roller chain which I had to remove because it had a few spots where links were rusted solid.  I ran it through the ultrasonic cleaner a few times.  The chain is cleaner but the rusted links are still stuck.  I think it is a #60 chain.  10 feet of it and a connector link from amazon is under $50.  The place is to order a new chain and avoid problems with the old one.
Posted by Anonymous at 2:41 PM No comments:

First attempt to start it.

The AENLD has a belt driven combo delco starter generator.   The advantage in this is that the starter does not need to disconnect from the engine because it switches over to acting as a generator.  There are separate windings for starting and generating.

The plan was to use jumper cables to run the starter.  It worked after I switched to a pair of good cables.  So I added a wee bit of 2 stroke oil to the spark plug hole and a spurt of engine starting fluid in the intake and run the starter. ....  Nothing

OK time to learn about magnetos.   The Wisconsin AENLD manual suggests checking for a spark to the block.  That sounded reasonable and familiar.  No joy.

As per instructions on the net I hooked a 2K ohm resistor to a neon lamp.  With this I could detect the magneto firing.  Also held on the the high tension lead and only got a mild shock.  Now I should add that both engines seem to have the same problem.   After checking with the local parts store for an points file and could not get one so I used an emery board on the second engine's points.  No change.

The guys on smokestack (thanks) say one can add an external condenser between the posts that you ground to turn off the engine and ground.  This puts it in series with the existing condenser.  If this made it run I would be happy to buy the new one but checking first sounds like a good idea.   I did not have any automotive condensers or electronic caps that would work.  Time to scrounge around.

Found a link to a Fluke document on Troubleshooting outboard motor magneto ignitions.


Posted by Anonymous at 5:17 AM No comments:

EDIT:  The manual has been located.

It should be understand that unless you own a VR30RE this blog will be of little or no interest to you.  However I am sharing my experiance in the hope that it may in time help others who opt to adopt one.

The Essick VR30RE vibratory roller is a 30" aprox 2000lb road roller.   It has a water system that wets the drums to keep asphalt from sticking.   It also has an eccentric that vibrates the front drum and improve compaction.  It is one of the smallest self propelled compactors and should be useful in compacting the base for sidewalks and pavers.  It is powered by a 9hp wisconsin AENLD engine followed by a clutch gear reduction and a chain drive to the front roller.  The gear reduction has Essick on it but it looks like it may have been made for them by Wisconsin or whoever made Wisconsin's gear reductions.

I purchased this VR30RE complete with trailer at a city auction in a non running condition.   The roller had been sitting unused behind the city shop for about 10 years and had sank into the ground.    To move the roller I had to dig ramps in front of the rollers and jerk it ahead.  The drive chain had rusted in but I discovered the connector link after I pulled it ahead.  I removed the drive chain and pushed the roller up onto its trailer with my tractor while my significant other steered the roller.

These pictures were taken when we arrived home with the roller.   The chain cover is off. 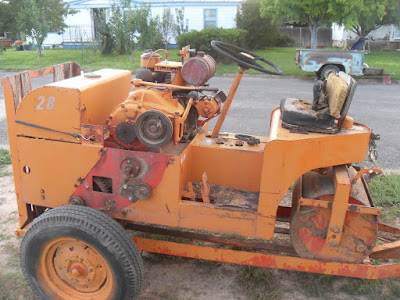 The goal is to get the motor running and then work on the machine .  After we will do a full service and then start on things like replacing the seat touching up the steering wheel. New wood parts.

Prior to finding the Essick I was planning on getting a plate compactor.  Even the harbor freight units are over $500.  I expect I can get it running for much less then that.  I would also like to thank all the people on Electro-Tech-Online, Smokestack, and other forums who are providing advice and moral support.

First I attacked the fuel system. The carb is a Zenith Bendix L63K  The upper half of the body was warped so I sanded it on a sheet of glass to improve it. Mostly around the bolt holes.  The bit on the end indicated by the arrow was warped too much so I added more gasket material there. 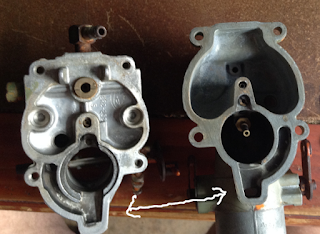 The rod from the governor was broken off and rusted in at the carb. 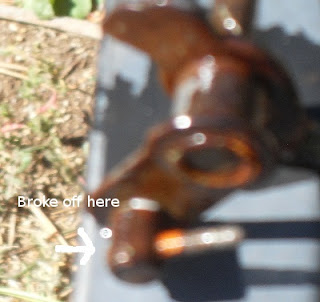 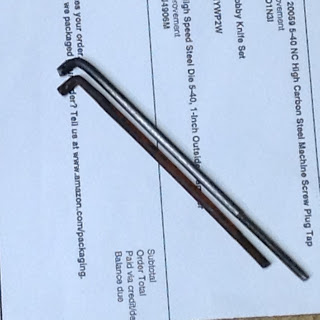 New ones are $1 +15 S&H.  I ordered a #5 tap and die off ebay and made on from a AC welding rod.  Used oxy propane torch to help make the 90 degree bend.   Cleaned up where it attached to the carb with the tap.

The carb was warped from over tightening.   I sanded it flat as I could using sand paper on glass then cut a gasket for it on the cricut.  This is an image of a trial cut using cardstock. 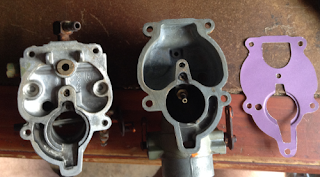 I purchased an ultrasonic cleaner for cleaning carbs and it seems to work quite well. I used it to clean the sediment bowl too.  This is a image of the carb after assembled.  I took this image to help make the intake gasket. 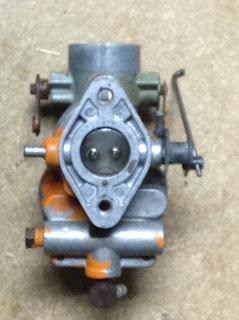 This is the process for designing and cutting a gasket.


Note that Make-the-cut was sued by the cricut people and only older versions of MTC software can be used to control the cricut.  But MTC works with several other cnc paper cutter.  The cricut was marketed to scrapbookers.  MTC is not free.

I ordered and recieved a sediment bowl gasket from amazon. 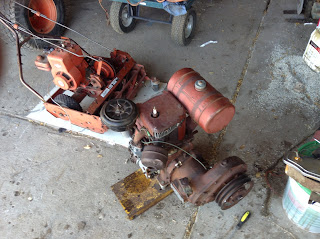 At this point I purchased another AENLD.  This one  has a gear reduction .  The original owner gave it to a guy who gave it to a guy who sold it to me.  Funny how that works but I was glad to get it and it was only $10.  Word was that the original owner said it ran when last used.  The orange mower next to it is a golf greens mower (I think), a Cooper Klipper Trim..  I picked it up from the same guy.  It has rusted in roller chains.

Posted by Anonymous at 4:26 AM No comments: